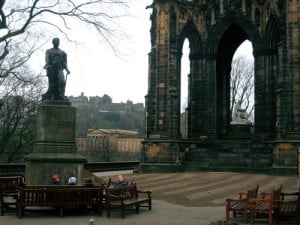 We move on from Edinburgh tomorrow but yesterday was a bad day for me… and I mean that in a good way for me, but bad for my credit card!… having a Harvey Nic’s in any town is always detrimental for me but glorious for my wardrobe.  In all, Edinburgh is definitely one of my favourite places to shop, and I don’t think it’s because there’s anything especially different here, I think it’s more because of the way everything is located in such a small proximity and the amazing scenery you get when walking in and out of all the regular high street stores along Prince’s Street.  Although at the moment the views of Edinburgh Castle and the UNESCO World Heritage site which is the Old Town (the New Town is also a World Heritage site) are rather interrupted as they will be for the next year at least, by the building… or should I say RE-building of the Prince’s Street section of the tram system.  Unfortunately this project (similar to the building of the Scottish Parliament at Holyrood) seems to be terribly over budget and somewhat unending… I’d say it was like painting the Forth Bridge but apparently the Forth Bridge was finished being painted recently!  The tram project has definitely been plagued with controversy though and was halted last year while it was decided how they were going to deal with the mess it’s in!  One way or another I don’t think it’s worth letting it put you off visiting the Scottish capital – the road works all over the city are rather a hindrance at the moment if you’re using any form of transport other than the train but just grind your teeth a bit as a visit to the city is always something I thoroughly enjoy whether it be for the shopping or otherwise.

The New Town is great for the condensation of your regular high street shops – Next, French Connection, Marks & Spencers, Top Shop, HMV, Waterstones… the usual places.  The Old Town however, is really just the tourist shops selling Scottish souvenirs, kilts and various other memorabilia, but it always gives me a buzz to walk through the Old Town and down the Royal Mile, even at night when there’s hardly anyone around except the the odd group gathered round an unusually dressed person telling ghost stories!

I’m hoping to come back on an independent visit in August for a few days at the Fringe Festival this year so I’ll write more about Edinburgh then, but the city really changes beyond recognition at that time of year so it’ll be like blogging about a totally different place.  For now, other than the roadworks which everyone is complaining about, Edinburgh is quiet and easy to navigate with all the regular attractions open all year round.  Edinburgh Castle, the Royal Yacht Britannia at Leith, The Real Mary King’s Close, and The Palace of Holyrood of Holyroodhouse (the Queen’s residence) amongst others, are all open for a fee; but there are plenty of really good museums and galleries where you can visit without spending a cent on admission as they’re all open for free – the Museum of Childhood; Museum of Edinburgh; The Writer’s Museum; The National Gallery; The National Museum of Scotland… these alone would take a couple of days to navigate!  There are also plenty of really cool places to eat either ‘on-the-hoof’ or for a leisurely meal.  I’ve not been to ‘Oink’ yet but my current Group Leader made a really good recommendation as he’s been there before – it’s at the bottom of Victoria Street and sells an amazing pork sandwich (normally with crackling and all the works!).  Personally I think ‘Deacon Brodie’s’ on the Royal Mile do a really good lunch menu, and another Group Leader I know always heads for ‘Stac Polly’s’ (there’s a couple around town).  My favourite though, has to be ‘The Dogs’, on Hanover Street – it’s the quality of food you’d find in a Michelin starred restaurant but at extremely reasonable prices you’d expect to find in a pub… I’d recommend you book though as getting a table can be tough, especially in the peak tourist season.

Edinburgh is a place I love to come back to so look out for more blogs on this fantastic city over the course of the next few months!  For now… we’re heading out on our week long tour of Highlands tomorrow, starting at the east end of the Great Glen at Inverness!

If you would like to get in touch with me or get advice for a trip you’re planning, please feel free to drop me a line via the Contact Page